ABOUT THE ALBUM :
Interview with Seb from Das Lunsentrio :


Their debut was centered around sleep, more specifically it was about staying in bed. A state which they performed live with a well-rested vehemence, like Jimmy Pursey does with his popular melodies. But now it’s time to get up!
14 multifaceted stand-alones with elements from sweaty german post new wave and lyrical surreal three-voiced agitprop via protest funk á la Ton Steine Scherben to rockers reggae alpenglow. Aufstehn! puts pub back into pub rock, works for dance floors as well as in a brauhaus.
Ultimately the music comes from London: Seb-I is is no stranger as a Dub-Producer for LaBrassBanda among others. At Das Lunsentrio he plays the Drums and more. Nick Mc Carthy – Keyboarder/Guitarist and formally part of Franz Ferdiand/FFS – is one who knows how to work a huge crowd, but now he rather goes by at a leisurely pace. Speaking of playing Live: On Stage Lunsentrio is accompanied by the Munich-Scene-Star Albert Pöschl and Martin Tagar (Friends of Gas, Das Weiße Pferd, Murena Murena and many more).
Pressefest and Das letzte Edelweiß (Last Edelweiss), an angry alpine floral lovesong about picking the last edelweiss for good are their new singles. In their video to Das letzte Edelweiß the band can´t leave their kiosk Berlin-Zehlendorf, so there is hope for alpine meadows. 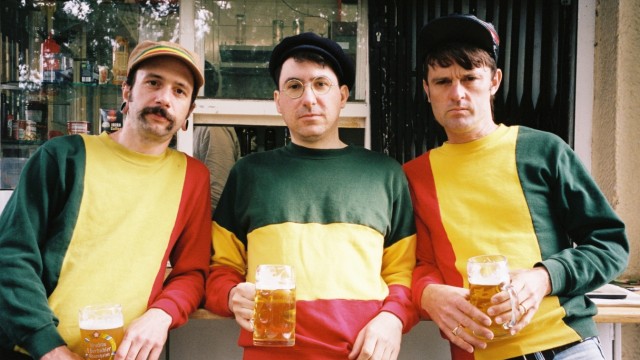 Nick McCarhty (ex-Franz Ferdinand and FFS guitarist) and Seb-I Kellig (dub producer for LaBrassBanda and others) – the trio records and produces in their conjoint East London Sausage Studio, and Berlin based artist and lyricist Hank Schmidt in der Beek are Das Lunsentrio.
Their first was LP Sebastian Kellig, Nick McCarthy und Hank Schmidt in der Beek singen und spielen den LUNSENRING published by themselves in 2011is both, a widely varied rock opera and a musical realization of Hanks volume of poems Lunsengedichte. A central lyric element is Luns borrowed from Rotwelsch jargon of „traveling people“, meaning bed.
THE VIDEO