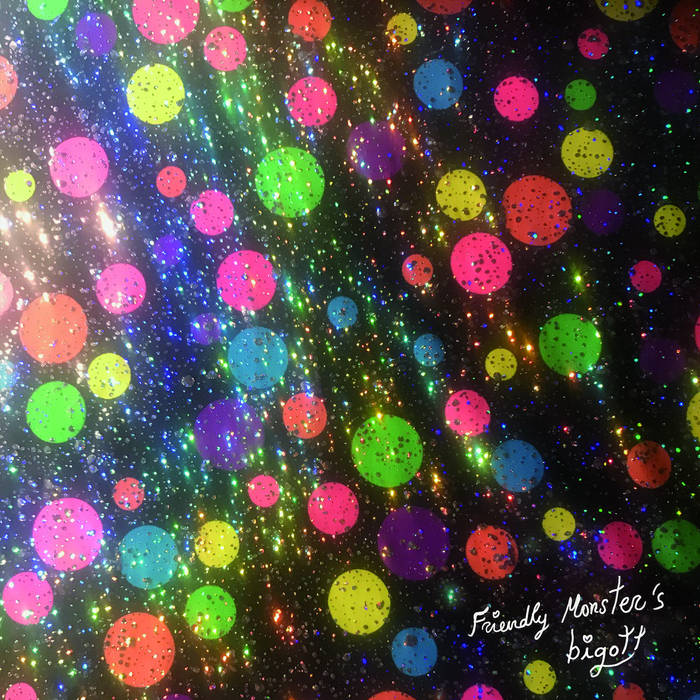 Bigott has been making cool albums for more than ten years, and “Friendly Monsters,” his tenth album, is just that: a charming monster – a collection of musical ideas from disparate worlds which join to form a species of creature…and its alive!

The first track, and album’s single, is “Dreaming,” a pure 90’s style pop theme.  It’s a  perfectly uncomplicated melody that just sneaks in – intact – as if it had always been with you, to make a cool start of things.

The album continues with “I luv U,” where Bigott jumps in to his deep space ship for a trip of guitars and love.  Simplicity addicts!

“Sweet Sweet Bang Bang” comes in without knocking; dark and potent, in a new register from Bigott’s versatile universe.  Its depth diving with distorsion tanks.

Then its time for “Release”: broken psychedelic love.  Junkyard sound for this heart-on-his-sleeve instrumental, vindicating the beautiful in all forms.

Here comes “Baby” and the temperature rises. Hot is sexy – the groove of Bigott’s voice whispering warm in your ear.  A loop softly out of focus that conforms the soundscape to a singular sexual harmonic.

Almost without realizing its cartoon town:  A peripatetic street vendor and his rickety wagon cut you off;  its “Virgin,” and before you know what happened…its gone!

“The City of Love,” a bright pop melody where Bigott plays at being Bryan Ferry trying not to burn up in the flames of Farenheit 451 but the sound is so sweet you want to jump in there with him.

“Creation” evokes the sound of the reset mode of the machine of primordial creation or the molecular chatter of pure light.  Whichever, its like the beauty of so many things of which we know so little.

To conclude Friendly Monsters, the master monster leaves us floating in a love infinity with  his delicate “Lost in the Universe”…an ending in one universe that is the beginning in another –  but all decoded through  the singular musical mind of Bigott.

Originality and quality are a constant throughout his discography; it is a difficult character to classify, both in his music and (even more so) in his person. Funny, passionate and with an amazing strength on stage. His live shows are unique experiences, an exaltation of the enjoyment of doing what one enjoys, contagious energy between Bigott and the public. Surrounded by his exceptional band, Cristian Barros (keyboards and guitar), Clara Carnicer (choirs and bass) and Juan Gracia (drums), the ensemble demonstrates great musical professionalism at the service of the spontaneous and magical show that Bigott creates on any stage he climbs.

Bigott has participated with his live shows in a big number of prestigious international festivals such as:

He has also been invited to play his songs live on reputed radio stations such as Radio Nova in Paris and Radio 3 in Madrid, where he has also recorded for 5 times the direct shows of his last 5 albums, for its diffusion in the spanish tv program “los conciertos de Radio 3”