For our weekly ‘Ideas on Europe’ editorial by UACES, the University Association for European Studies, we welcome Malin Stegmann McCallion again, from Karlstad University, in Sweden.

On the 1st of January, Sweden has taken over the EU Council Presidency. What does it sound like?

Last week the Presidency released its playlist on Spotify. There is a tradition that the member state holding the presidency also compile a playlist that represents the country. Immediately there was a discussion about why some genres are not represented, and some songs have already been replaced.

All presidencies are complex balancing acts, but for the current Swedish government the coming six months could be unusually complex given the national and international contexts.

And this complexity is reflected in the playlist?

It is! Parts of the discussion and comments around the playlist bring forward mixed messages about our own self-image.

Music, and the creative sector in general, is a big export industry for a small country like Sweden, and of course we are proud that we can punch above our weight internationally, just like we do in sport.

But – there’s always a ‘but’ – one criticism of the playlist is that it is showcasing Swedish commercial success. That’s what I mean by ‘mixed messages’ about the Swedish self-image. Have you heard about the ‘Law of Jante’?

The Law of Jante is a kind of rulebook for social behaviour in Nordic countries, drawn from a novel of the 1930s. Basically, it’s about not standing out from an egalitarian social group, a warning not to break the accepted social code of ‘not wanting to be better than others’.

A good part of the Swedish culture of consensus and conflict avoidance can be traced to the Law of Jante. And this trait or behaviour pattern can become very useful this time around during the Council Presidency, as the main task of a Presidency is to carry the common agenda forward. There are some tricky issues on the agenda where all the consensus building know-how and the conflict transformation skills will need to be put to good use.

What issues are you referring to in particular?

We have for example the Inflation Reduction Act passed by the US government, and here the Swedish Presidency will have to negotiate the relationship with the US on behalf of the EU. We have to take into consideration the various opinions within the member states and EU institutions in finding ways of not escalating a possible trade conflict with the EU’s biggest trade partner. A potentially tough balancing act.

Closer to us we have the question on how the EU should continue with its support to Ukraine. How can Sweden keep the ‘unwavering support’ to Ukraine at continued high level within the EU?

I don’t think the EU’s support for Ukraine is in immediate danger. However, in the long-term – and broken down into specific policy areas such as economic aid in relation to a ‘Ukraine Marshall Plan’ – we will see real differences emerging between the member states, especially bearing in mind energy supplies and past relationships with (or dependencies on) Russia. Our willingness to provide aid may decrease if the costs at home continue to be at a high level.

Then of course we have the social costs of war and unfortunately here too we see differences between member states on how the EU can help both where it is directly needed but also with the people fleeing atrocities. This is a further tough balancing act for the Swedish EU Presidency.

And what about consensus within the complicated Swedish government coalition?

Traditionally, when a member state holds the Presidency, there is a truce domestically and the country speaks with a single voice to outside listeners. This time around, internal political differences are more openly discussed and aired. The Swedish general public is today more positive and supportive of EU membership, but the current government is relying on the support of a Eurosceptic party and many wonder how this may influence the Swedish Presidency, meaning the government has also domestically an unusually complex balancing act to pull off.

All this ‘balancing’ brings me back to the ‘Songs of Sweden’ and if we talk again in the summer summarising the Swedish EU Presidency in retrospect, I will be able to say whether we have executed all our dance moves well.

We’ll be more than happy to have your assessment in June, and hopefully, you’ll sing us a positive tune rather than a sad ballad.

Many thanks for sharing your outlook with us. I recall you are associate professor at Karlstad University.

The Qatar World Cup and its Diplomatic Outcomes
5 minutes 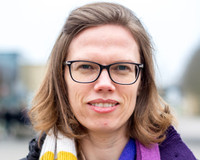